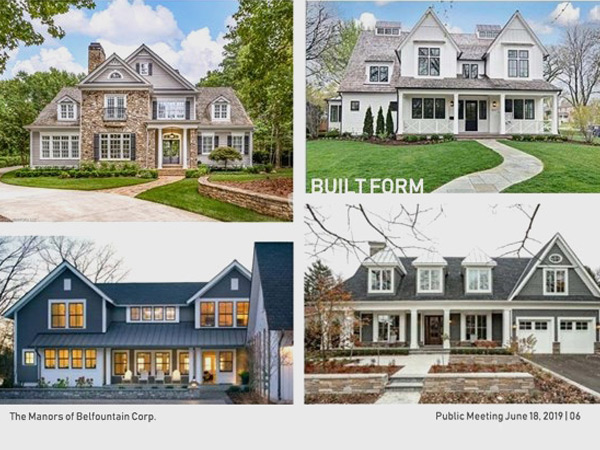 “I am directly threatened by this project,” said Bush Street resident David Greig during a public meeting for a proposed 70-lot subdivision in the village of Belfountain. “I am unpleasantly surprised I have to come here to ask that this development be rejected. I would have thought the rules of the Niagara Escarpment Commission protect this farmland from urban degradation?”

Greig was representative of the tone of a public meeting held by applicant Manors of Belfountain and conducted by their planning consultant Nicole Yang.

Yang explained that the Manors application is for a 70-lot estate subdivision, with lots ranging from half a hectare to one hectare, all serviced by private wells and septic systems.

She said the development would include an 18-hectare open space block, five hectares of storm water management ponds and a two-hectare community park.

The proposed open space block is to be conveyed to the Credit Valley Conservation group and includes significant woodlands and a preserved habitat of endangered Jefferson salamander. Further north, Yang said, they are preserving a farm complex that has cultural heritage value and have also left habitats for the bobolink and eastern meadowlark.

She argued that a board decision in 1990 had acknowledged a potential for residential development on the land, and said, despite an obvious lineup of residents intent on protesting the development, she believed future homeowners would be in support of the proposal.

“The intention is to build a community for families,” she said.

No thank you, said the residents of Belfountain and area in attendance.

Paul Montgomery questioned the numbers used to justify the development. He said while the builder is guided by provincial planning numbers that say it will be an average of five people per household, to him, the reality is different.

Montgomery lives just north of property and said his concerns revolved around traffic, water and septic systems, but his speech focused on the potential family sizes of purchasers.

“It’s well known now that the people that are moving north are multi-generational families,” he said. “They occupy mom and dad and three kids, three spouses of the kids and their three kids.

Montgomery acknowledged that his well is “awesome” and he has “unbelievable” amounts of water, but said he believes water will become a problem if they’re developing for nine to 10 people per home, instead of five.

He also asked that if the developer was going to build, they make an access onto Mississauga Road as well as Shaw’s Creek Road, or not build it at all.

A future resident who only identified herself as Madeline said she was moving into the village in a month, and asked Yang about street lights, traffic and water capacity. She asked the town to confirm if studies are peer reviewed and wanted a confirmation that Shaw’s Creek Road would be paved in the future, as the traffic studies noted.

Yang told Madeline street lights would be part of the detailed design phase, but light pollution was always a consideration of development.

Greig continued in his presentation to say that no one could argue that turning farm fields into palatial estates is not at all harmful to both the natural and human environment of Belfountain.

“The only debate is about the amount of damage, from somehow tolerable, to disastrous,” he said.

Les Mandelbaum, who owns a 100-acre farm at Kennedy and the Grange, said his family bought the property to be in proximity to the Niagara Escarpment Commission, Belfountain and the Forks of the Credit, and he wanted it maintained as it is.

“I think we, and you, have obligation to protect this,” he said. “There is nothing like it in the province.”

Katherine Tremble-Taylor said a community meeting was held in August 2017 by the Belfountain Community Organization to share the news of the sale of the subject lands and gather resident input on what was wanted in Belfountain.

“It was requested the property remain in some form of undeveloped state,” she said, saying Belfountain residents were all particularly concerned about the environment.

“Conservation of habitat, flora and fauna is important to all of us.”

Jenni Leforestier suggested it is time the town enact a Belfountain heritage district to protect the village, as well as properties with historic value.

A number of other residents continued to present concerns regarding traffic, condition of roads, the look and feel of their village, and the climate change impact of the proposal.