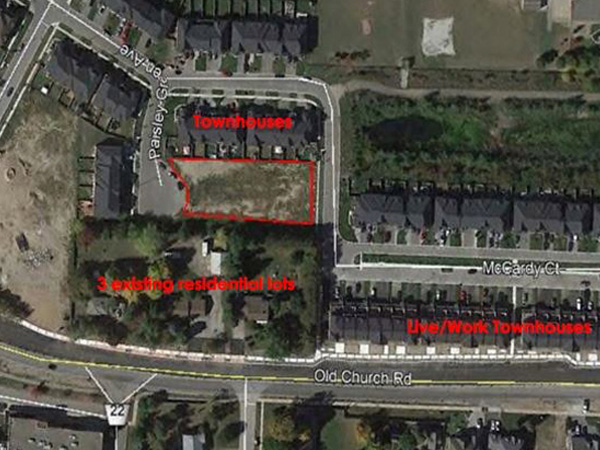 A second Caledon East development application was met with concerns about increased traffic and sightlines from members of the public at Caledon council on Tuesday night.

The 14 unit, three-storey townhouse development was the first of two applications for the north side of Old Church Road, just east of Airport Road. On a night when crowds were expected for a five-storey condo application at 0 Atchison Dr., many of the same themes were expressed about the smaller proposal on McElroy Court and Fallis Crescent.

Pluribus Corp. is looking to put two seven unit three-storey townhouse rows on the lot, and are asking the town to reduce the minimum lot size by 30 square metres, the lot frontage by approximately two and a half metres and increase the building height by approximately two metres.

The units would have approximately 2,000 square feet of living space, as well as two tandem parking spaces in a garage, and one driveway parking space.

Spokesperson Paul King said the development would require the town removing a hold put in place on the lot, meant to be in place for the extension of McElroy Court. He explained that nothing had happened on the extension in six years, and the studies done for the application showed it would be independently serviced and not require the extension.

“There isn’t any technical reason to hold the subject property in anticipation of the road extension,” he said.

McElroy Court resident Tony Cuccione said the reason he would like to see it held was parking.

“We have issues right now when people come to visit,” he said. “We can only park where the townhouses are going to be built. Take that away from us, and we can’t have people come visit us.”

Cuccione also said he would like to see his court remain in the cul-de-sac design it is at now without the road extension finished.

“I would like to see you make that permanent so eventually it doesn’t open up and see McElroy connect to other roads.”

Sarah Reginato-Zahra asked the developer to consider the size and look of the surrounding homes in their proposed design, and said in her view, going taller didn’t fit.

“If you look at what’s around where the townhouses are going, it’s two storeys or a single storey. I don’t understand why there needs to be a three storey? It just doesn’t fit. You should think of the people who live in the subdivision.”

She added that having the building in front of old homes took away from the village, and critiqued the lack of green space in the proposal.

“I find that a little sad.”

Bill McEwan said he lived on Innis Lake road, and already saw a large increase in commuter traffic from the increased development north of him.

“It can take five to seven minutes for me to get out of my driveway,” he said. “Traffic congestion is already a problem, and it’s going to get significantly worse.”

The traffic study done for the proposal showed data was gathered twice, on a Wednesday morning and late afternoon in January 2018, 7 a.m. and 4 p.m. respectively. McEwan asked the developer to produce a study that showed the traffic with the new homes since then, and new homes that would be coming in the future.

“I don’t see the infrastructure as being able to handle the traffic,” he said.